Checkout my previous post about why I'm doing this.

My backyard has some steep hills, so for this project, I decided to use that to my advantage.  The plan calls for a modern shed with a walkout coop underneath, built into the hillside.  Here's a list of things I wanted in a shed:

Here's what we decided on:

Since my dad had volunteered to help, and I've never built anything like this from scratch, he did the initial plans and lumber list.  While he was doing that, I got started on escavating an 8x8ft area by hand and doing the foundation. 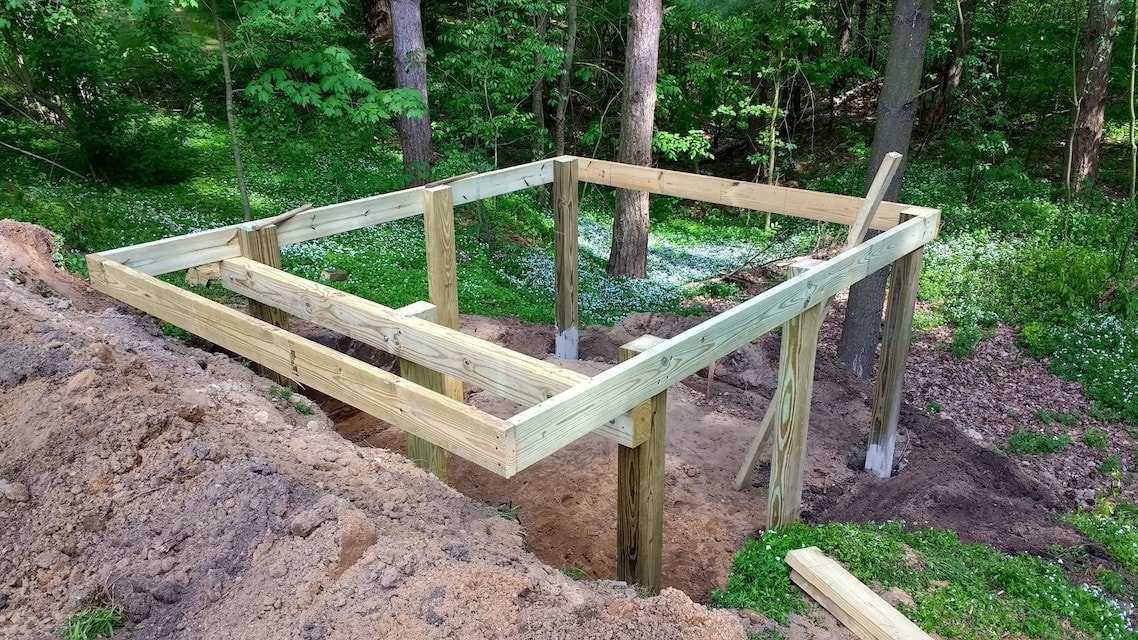 The start of the foundation, with 2' overhang in front.

The foundation is anchored by seven 4x6x8 posts sticking about 48" out of the ground.  Everything here is basically held together with large lag bolts. 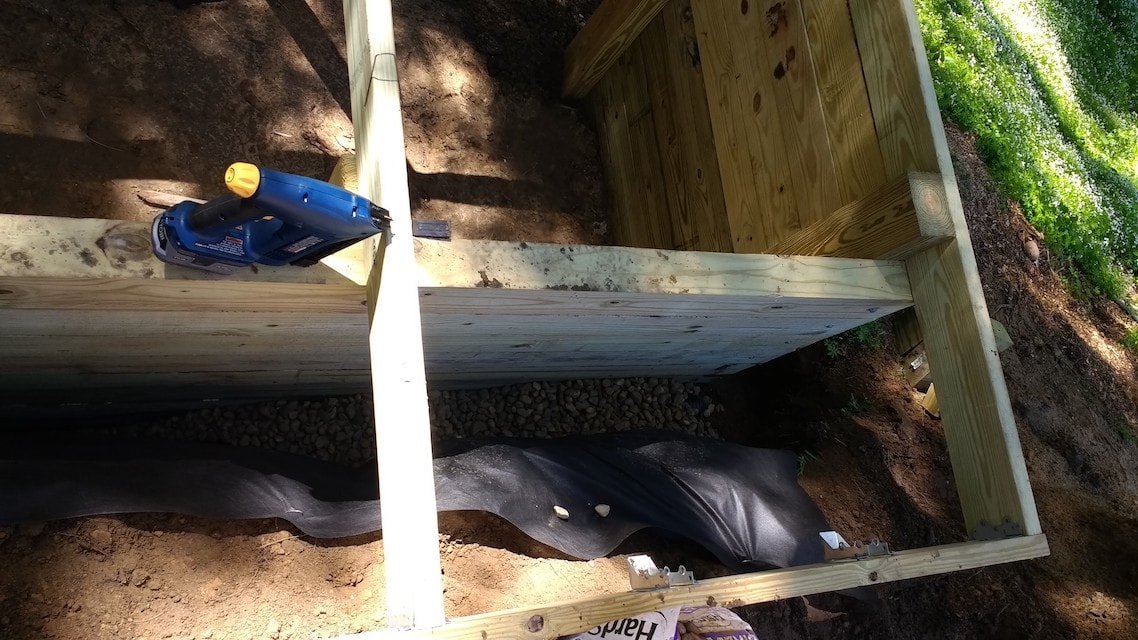 Detail of the retaining wall with drainage stones and fabric.

I used more 4x6x8 posts to build a retaining wall 8ft wide and about 48" high.  I also ran a drainage pipe covered in landscape fabric and stones to aid in drainage behind the wall.  I considered using stone for this wall, but the ease in attaching the timbers directly to the existing posts was too appealing. 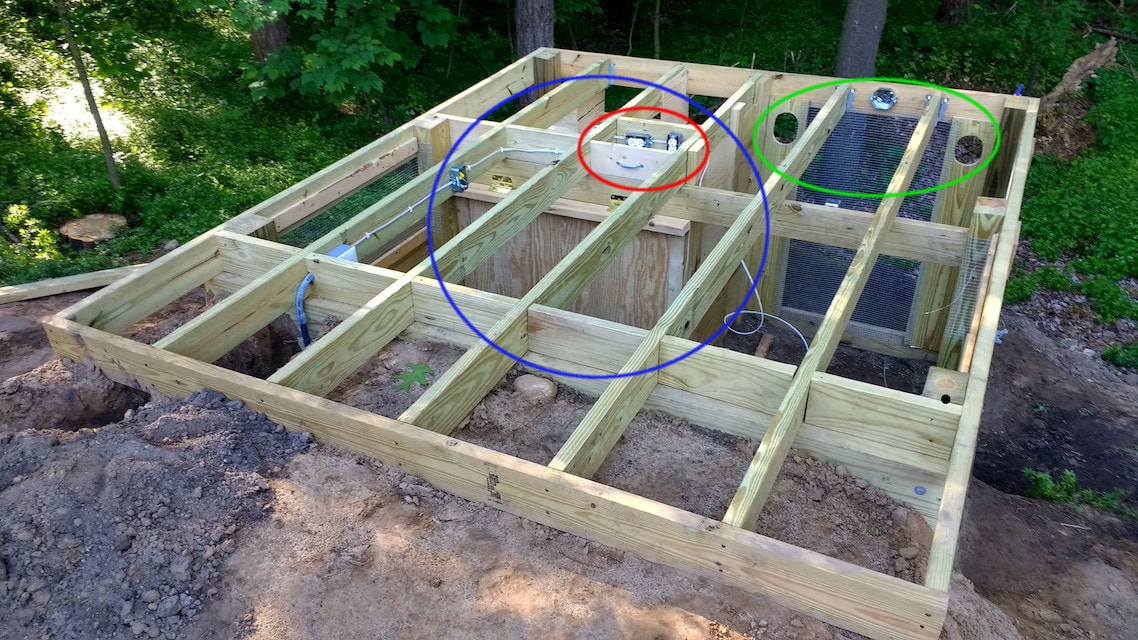 The image above shows the actual coop in the corner circled in blue, it measures almost exactly 4x4x4ft, taking up a quarter of the available 8x8ft space.  I was working on the wiring here, but you can see the openings circled in green, where the food and water will be.  Circled in red is where I plan on putting most of the electronics, accessible via the magnetically attached panel.

The exterior door to the run

The run is accessed by a single 4x4ft door and all openings are closed with 1/2" hardware cloth.  You'll see stuff sold as "chicken wire", but that just keeps chickens in, it doesn't keep predators out. 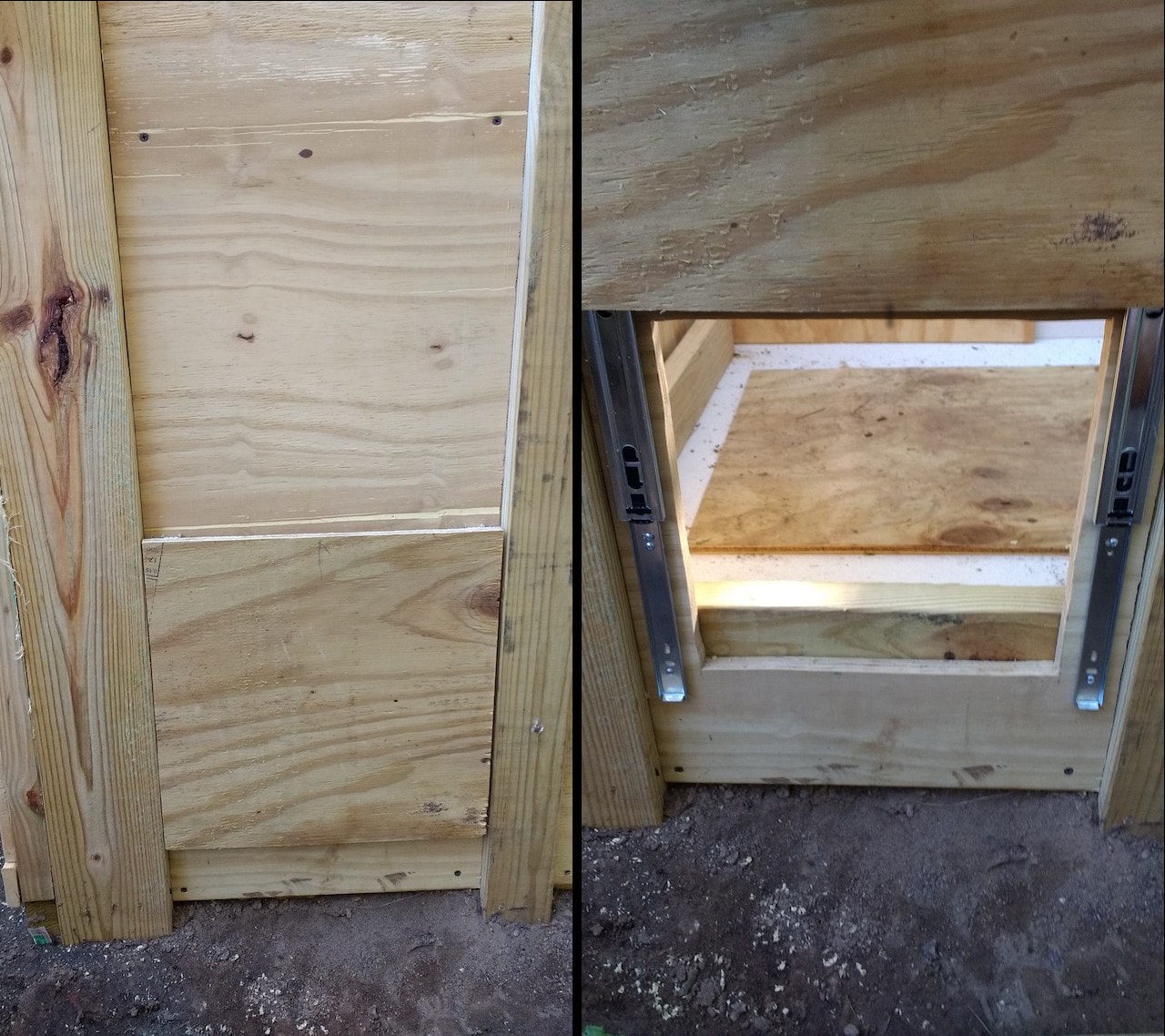 This is the coop door that will be automated, sliding up and down on repurposed drawer sliders.  The drawer sliders are not rust-proof, so I tried to protect them from the elements and also plan on oiling them regularly.  The nice thing about this design too is there's about a 1/2" gap between the wall and the door, so it shouldn't chop off any chicken toes.

To minimize the amount of time I have to spend bending over in my 48" tall coop, I wanted to be able to fill food and water from the outside.  Having read a lot about it, I decided to build my own PVC devices. 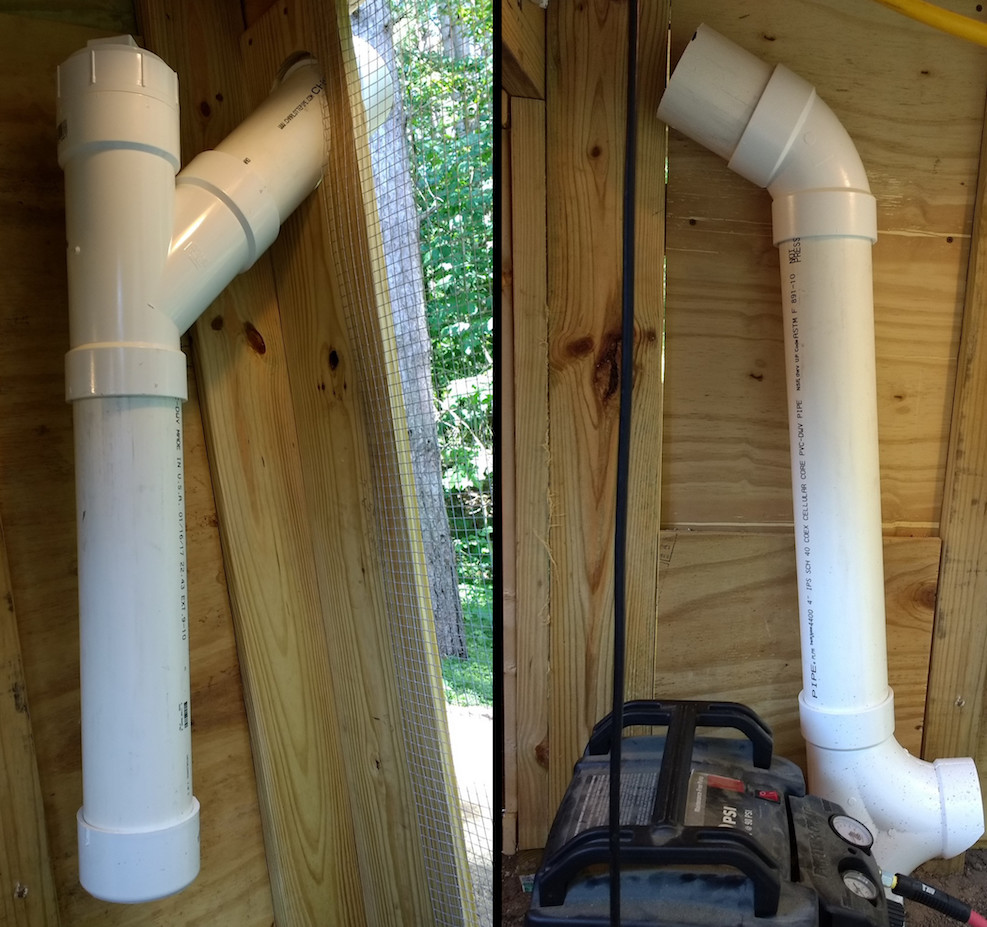 The waterer uses red nipples (not shown) and a cleanout at the top to allow the insertion of a heater in the winter.  The feeder is only slightly modified from this design.  The main advantage of this design over many others you'll see is this better protects the feed from moisture.

The shed sits on top, and it pretty standard fare.  I went with 7ft stud walls, since the slanted roof and transom windows will add a foot or so more on the top. 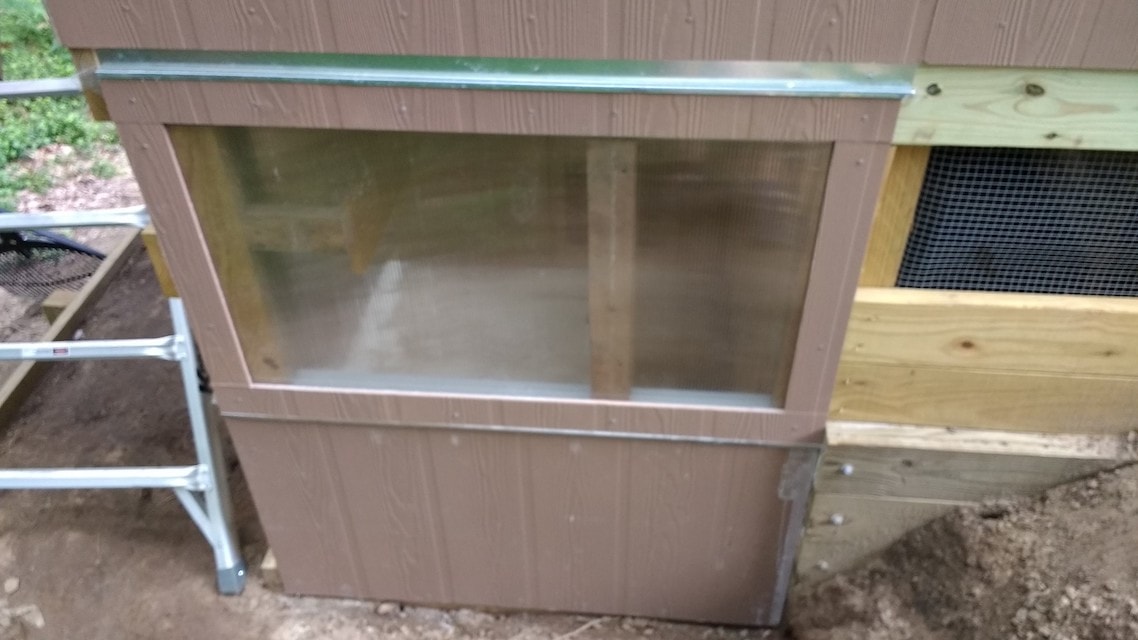 Coop far side, with window.

The transom windows and this window were all taken from a single 4x8 sheet of corrugated plastic roofing.  I used it because it costs a lot less than plexiglass, I didn't need perfect clarity, and it provides extra insulation and strength. 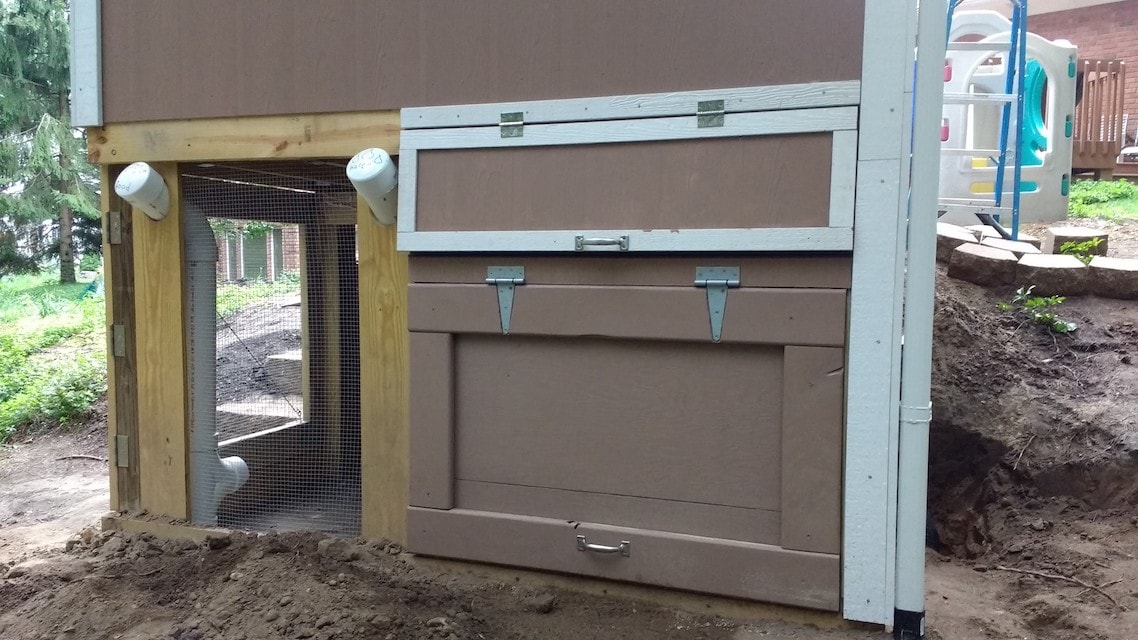 Checkout my next post on hardware for the automatic door.